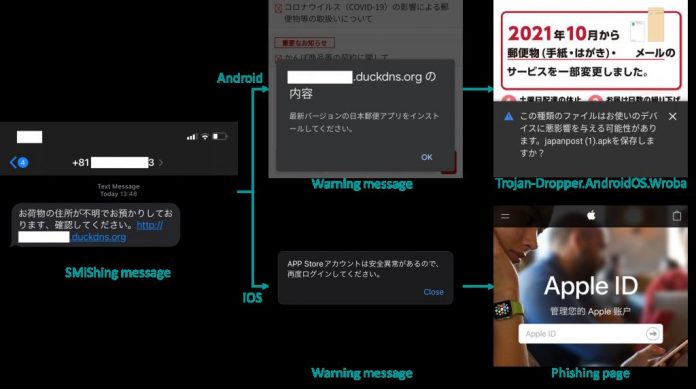 With the continued uptick in the adoption of mobile banking in the Asia Pacific (APAC), global cybersecurity company Kaspersky warns of more attacks against Android and iOS devices. Particularly, active monitoring shows the notorious Anubis Trojan now delivers a combination of mobile banking Trojan with ransomware functionalities to its target smartphones.

Kaspersky elite researcher, Suguru Ishimaru, zeroed in on the mobile threat landscape in APAC to answer: what if there are no smartphones? Sharing the reality that users cannot live without a mobile device, he unmasks the latest malware targeting iOS and Android users in APAC during the company’s 8th Cyber Security Weekend in Phuket, Thailand.

Mobile banking Trojans are one of the most dangerous species in the malware world. This type of threat steals money from mobile users’ bank accounts usually by disguising the Trojans as legitimate apps to lure people into installing the malware.

Anubis is a mobile banking Trojan targeting Android users as early as 2017. Its worldwide campaigns targeted users from Russia, Turkey, India, China, Colombia, France, Germany, the US, Denmark, and Vietnam.

This malware family continues to be one of the most common mobile bankers, according to Kaspersky’s latest mobile statistics in the second quarter of 2022. In this period, one in 10 (10.48%) of unique Kaspersky users globally who encountered a banking threat has encountered Anubis mobile banking Trojan.

Once in, this infamous mobile banker can do a complete device takeover. It can steal personal information and identity, access private messages and login credentials, record sound, request GPS, disable play protect, lock the device’s screen, and more.

“Anubis is known for compromising hundreds of bank customers per campaign, proving that it’s among the most active malware targeting Android users right now. Our recent findings show that the cybercriminals behind this threat have started implementing ransom functionalities. If this modification proves to be successful, chances are other malicious groups will copy the same technique of stealing data and holding devices hostage. As a result, I expect to see more of such attacks in APAC due to cybercriminals’ strong financial motivation,” says Suguru Ishimaru, Senior Malware Researcher for Global Research and Analysis Team (GReAT) at Kaspersky.

The threat against Android and iOS users: Roaming Mantis

Another prolific threat actor targeting mobile banking users, globally and in the APAC region, is Roaming Mantis. The group carries out malicious campaigns that target Android devices and spreads mobile malware initially via DNS hijacking and currently through smishing.

Kaspersky experts have been tracking its operations since 2018 and detected almost half a million attacks in APAC from 2021 to the first half of 2022. Most numbers of the malware were blocked from infecting Kaspersky users in Russia, Japan, South Korea, India, and China.

Using the same techniques, the smishing messages targeting iOS users contain a very short description and a URL to a landing page. If a user clicks on the link and opens the landing page, there are two scenarios: iOS users are redirected to a phishing page imitating the official Apple website, while the Wroba malware is downloaded on Android devices.

“There is a notion that iOS is a more secure operating system. However, we must take two things into account – the increasing sophistication of mobile bankers’ social engineering techniques and malware arsenal and the possibility of human errors. Remember that both Anubis and Roaming Mantis require users’ participation before they can take over a device. With more than half (63%) of digital payments in APAC doing their financial transactions online through mobile devices, awareness is no longer enough. Protecting our smartphones is a step that everyone should be doing by now,” adds Ishimaru.

E-Payment for Your Business