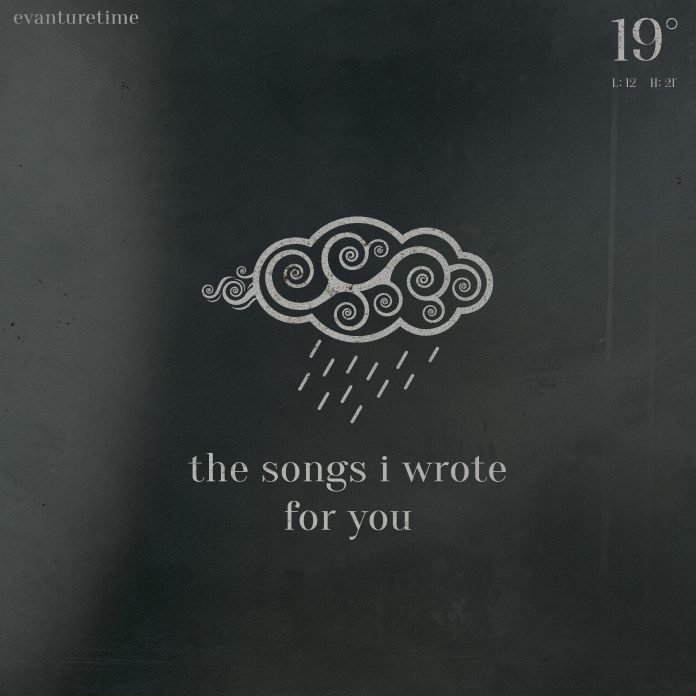 Having released the tugging (heart) strings of a single, ‘together pt.1’, in February this year, Singaporean music producer, evanturetime has announced the release of his long awaited EP, ‘the songs i wrote for you’. Made available on all major digital streaming platforms on 29th April 2022, the EP will include the focus single, ‘for any weather’, a collaborative effort with 3 local artists, Estelle Fly, Marian Carmel, and Shye.

‘the songs i wrote for you’ began as a secret project while evanturetime and his (now) wife were dating. Inspired by the five stages of love, the EP is meant to be the music producer’s grand gesture of love, in dedication to his wife. Tender and heartfelt in its conception, each song represents a different stage of companionship for both evanturetime and his collaborators. Starting with the celebratory single, ‘love is’ in Chapter 1 of entering the honeymoon phase of the relationship, which leaves the listener giddy with excitement and seeing only all things positive. ‘if it’s with you’ uncovers the undiscovered flaws that come with becoming more comfortable with each other.  The combination of routine and stress that often accompanies big life changes that may lead to feeling disenchanted in a relationship. The single is written from the first-person perspective of someone in a relationship, eager to explore the natural flow of desire and features Marian Carmel for vocals.

The focus single, ‘for any weather enters the third chapter of the EP,’ and incorporates the joint forces of Estelle Fly, Marian Carmel, and Shye’s vocals, with evanturetime’s signature style of blending sound design and music production. The results – a surprise burst of electronic pop that retains the heartfelt love theme of the EP, but also an infectious chorus that builds up as the song progresses, complementing the tumultuous nature of the song.

“‘for any weather’ was written on the day my wife and I moved into our apartment together. I was testing my new home studio setup by writing a few bars of music when my wife came into the room and responded positively to what I wrote. Having recently worked with Estelle Fly, Marian Carmel and Shye on the recent Hometown Heroes series, I immediately thought that this would be a good opportunity to be able to work with this lovely trio again. We had talked about how it would be cool to push ourselves further with a new track, something we can call our own that reflects our love for dance and music, and to us,  this was the perfect number for it,” evanturetime.

A previous single, ‘you’, that was released together with local soul man, Tim De Cotta and electronic vocalist, Vandetta, signals the chapter of balance and stability. A simple tribute to legends of  music production and beat-making, J Dilla and Nujabes, ‘you’ represents getting through the past chapters of love together, and learning to love based on acceptance and compassion. ‘the songs i wrote for you’ EP ends off with a 2-part gesture of love – evanturetime’s last released single, ‘together pt.1’. A collaborative effort with Japan-based composer, Eiji John Mitsuta, that was first played during evanturetime’s wedding banquet,  that explores the meaning of unconditional love. ‘together pt. 2’ is a reimagined version that sees evanturetime teaming up with prolific folk=pop singer-songwriter, lewloh.

The EP signposts not only his personal life, but also an evolution of the evanturetime sound.  He explains, “My music is a continuous series of audible timestamps of who I was during different  moments in my life. I’d love to commemorate this important moment in my life so that I can look back years later and see how I’ve grown both as a human being and a musician.”

Throughout his ever-growing career, Evan Low’s (under the artist moniker, evanturetime) versatility has seen the music producer take on multiple leading roles in every aspect of the music industry. From engineering for David Foster and Nathan East, to composing for brands such as OkCupid and eBay.

evanturetime has produced and performed alongside artists such as Nathan Hartono, Linying, and The Sam Willows with hit songs amassing more than 10 million streams. He has also collaborated with other creatives in the industry, creating multidisciplinary works in collaboration with the likes of visual artist, Sam Lo (SKL0), and urban dance crew, O School. He is also Music Director for Singapore music heavyweights Benjamin Kheng and inch. The latter was recently part of the team awarded Best Sound at The Straits Times Life Theatre Awards for his work in ‘Til The End Of The World, We’ll Meet In No Man’s Land’ (2020).

evanturetime continues to hit hard in both commercial and artistic realms. Having taken strides as a former creative lead and co-Founder at Zendyll Productions, he has also co-arranged and co-produced the 2018 – 2021 National Day Parade Music under the direction of Dr. Sydney Tan. Most recently, he has penned and produced the well-loved 2021 NDP Theme song “The Road Ahead” with Linying.

Preview ‘for any weather’