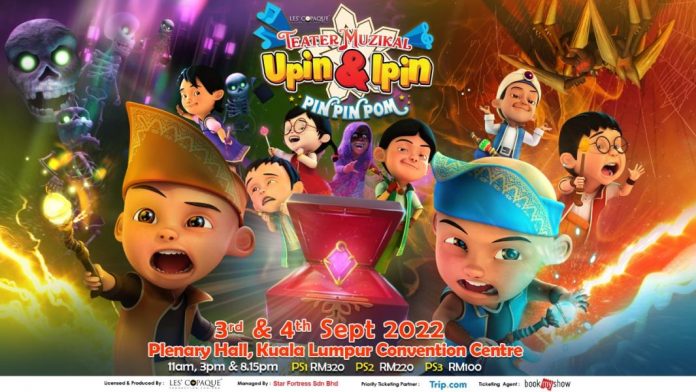 Upin and Ipin, the famous Malaysian 3D animated TV series, is set to charm the theatre stages again with a musical in Malaysia. Trip.com is the exclusive ticketing partner for the performance.

Upin & Ipin is a beloved 3D animated series that revolves around five-year-old twins and is part of Malaysian pop culture. The famous catchphrase “Betul, betul, betul!” it has made the series an established Malaysian animated brand that reaches over 300 million viewers.

Now gracing the stage, this theatrical performance follows the story of Upin & Ipin as they discover a magical stone in their village and journey through the magical world of Pin Pin Pom.

The show delivers an enthralling experience through the utilisation of the latest technology such as special effects, lighting and LED screens.

Upin & Ipin – Pin Pin Pom! is created by Malaysia-based production house Les’ Copaque Production. The show follows the story of the twins as they discover a magical stone in their village that belongs to the infamous Wicked Witch, Nenek Kebayan, who has an evil intention of conquering the magical world.

The twins are tasked to defeat her with their magical power and save their village, witness, as they transform into new characters – the magical warriors and fight Nenek Kebayan. Will Upin and Ipin manage to stop Nenek Kebayan and protect the magical world and Kampung Durian Runtuh?

Featuring songs from crowd favourites such as “Gembira Bermain”, and exclusives like “Upin & Ipin Berani” and “Pin Pin Pom!”, Upin and Ipin will be accompanied by their close friends, who regularly appear in the series, including the bossy Ehsan, the clever Mei Mei, the young entrepreneur Mail,  and their  Indonesian friend,  Susanti. The performance features new characters specially created for the theatre in the form of the new incarnation of Upin & Ipin -‘the magical warriors’ and Nenek Kebayan, the witch.

The show will be held at Plenary Hall, Kuala Lumpur Convention Centre, on 3rd and 4th September 2022 at 11 am, 3 pm and 8:15 pm. Tickets will be available in three price categories: RM320, RM220, and RM100. Get ready for a show filled with thrilling action and memorable moments that are bound to entertain the audience as they sing along.

For more information, including the Terms and Conditions, please visit: https://my.trip.com/things-to-do/detail/45137828/?locale=enMY

The World’s Most Beloved Musical – The Sound Of Music is Now on Sale!