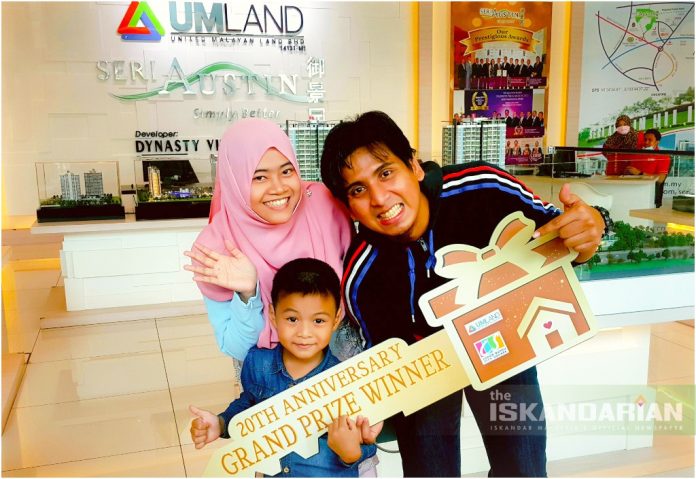 Mohd Hazwan Ali, 32, a pharmacist, initially purchased Camellia Residence also in Seri Austin and that made him eligible for the lucky draw entry that was running from 1st April 2019 to 31st January 2020. He was not aware of his winning until he got a phone call from the organiser at work. “I was shocked and my first response was questioning the legitimacy of such a call,” he said.

Hazwan was informed that his name was drawn on JBCS’s Facebook live broadcast on 29th August 2020 and he checked the recorded video with his colleague to ensure it is real.

Hazwan’s spouse, Nursyafreena Atan, 33, UTM senior lecturer said they bought Camellia Residence as a surprise for Hazwan’s parents and they got an even better surprise now. Currently residing at their own house in Gelang Patah, Johor the family planned to stay in Seri Austin as the neighbourhood is nearer to a choice of school they wanted their son to attend in Senai.

The first ever co-hosted event by UMLand Seri Austin and JBCS saw a total of 13,000 entries and, 13 lucky draw prizes were offered to those who spent a minimum of RM200 at any outlets in JBCS and to all UMLand’s house buyers.