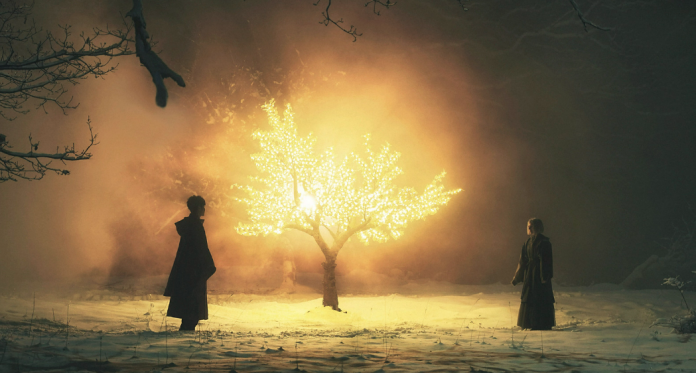 Universal Music Group is proud to announce a new artist-collaboration track, “Storm,” featuring Aurora, Norwegian singer-songwriter and alt-pop sensation, and Qing Feng Wu, one of the Greater China’s most accomplished Mandopop singer-songwriters and best known as indie-band Sodagreen’s frontman. The album was released by Decca Records and launched digitally on 17th June 2022.

The 20-second official teaser video clip of “Storm” was released featuring Aurora’s ethereal yet powerful voice alongside Qing Feng’s bold, enchanting vocals. On 7th June, teasing their fans around the world, Aurora and Qing-Feng both uploaded a handwritten photo of “Qing-Feng X Aurora” on their social media platforms, attracting pre-launch buzz on social media as well as amongst international press outlets.

The co-creation of their highly anticipated track, “Storm,” began a year ago, in 2021, when Aurora was working on her new solo album project, “The Gods We Can Touch.” The two labelmates were connected through Universal Music, first as genuine enthusiasts of each other’s talents, sharing and discovering similar musical tastes, then eventually developing ideas to collaborate. “I have long been amazed by her ethereal vocal power,” Qing Feng said. “It is beyond my expectation that we can be the storytellers of our own music together.” This beautifully crafted joint work by two of today’s most talented artists transcends all boundaries — from geographical to cultural, creative and communicative. Aurora and Qing Feng unite through soft, dreamy verse, journeying to a powerful yet mesmerizing climax, while seamlessly incorporating multiple musical pop genres, including indie, synth and electro.

After almost a year of making music at a distance and collaborating online, experimenting with their own ideas and thoughts, the pair decided that “Storm” would be their first release together — hoping to encourage people to confront their challenges in life. Months later, during the post-production mastering of “Storm,” they also decided to meet up in person at a studio in Norway. Taking a 20-hour flight from Taipei to Oslo, Qing-Feng finally met Aurora, completing the track’s final recording together.

Aurora Aksnes started writing her own songs and learning to dance at age six. After finding popularity in Norway through her online track uploads, she signed her first recording contract at age 18. Today, known worldwide as Aurora, the 25-year-old avant-pop enigma has amassed more than 2.5 billion global streams across platforms and is renowned for contributing backing vocals to “Into the Unknown” for the Disney animated musical film “Frozen 2” soundtrack — which has reached over 400 million views on YouTube and earned both Academy Award and Golden Globe Award nominations for Best Original Song. She is highly regarded as one of the most outstanding and preternaturally talented singers under the age of 30, with Billie Eilish crediting Aurora as an inspiration and muse for her own music.

Qing Feng Wu, best known as the lead vocalist and main songwriter of Taiwanese indie band Sodagreen, is one of the most accomplished Mandopop singer-songwriters and the musical phenomenon of the moment. Qing Feng is the only artist who has won all three major categories – Best Lyricist, Best Composer and Best Male Artist — in the history of the Golden Melody Awards, one of the most prestigious Chinese-Pop music-honouring platforms. Growing up listening to classical music and taking piano lessons, his natural songwriting skill and creative talent led him to become one of the hottest songwriters and hit-makers of his generation — where, to date, he has crafted 1,000+ tracks over the years for top A-list Mandopop artists. Qing-Feng’s 2019 debut solo album “Spaceman” was the best-selling Mandopop title of the year, not only in Greater China but across all Mandopop music markets.