As the world celebrates another Valentine’s Day, Kaspersky today explores the risks wrapped in finding relationships online, the possible toll it can incur monetarily, and how users can keep their hearts and finances safe from romance scammers on the internet.

Romance scams are on the rise since 2020 when the pandemic first hit the world. With limited physical movements, the internet, particularly social media platforms, have provided a critical connection for people. Kaspersky’s own research finds that more than half (53%) of social media users around the world have used social networks more during local and national lockdowns than before.

The same research also revealed 18% of the 1,007 adults surveyed to represent Southeast Asia (SEA) use social media mainly to find romance and the majority (76%) confirms that social media has provided them with a vital connection during global health emergencies.

In addition, close to a quarter (24%) of the respondents from SEA said that they have formed real-life, in-person friendships with people met initially on social media while another 18% admitted that they dated someone they’ve met on these platforms.

This blossoming way of finding a partner, however, also comes with emotional and financial risks.

For instance, in 2021, law enforcement agencies from Singapore and Malaysia worked together to track down a group specialising in romance scams. The syndicate was allegedly behind at least eight scams in both countries, including the case of a 41-year-old Singaporean woman who ended up losing a total of $28,000.

Another Kaspersky research – “Mapping a secure path for the future of digital payments in APAC” –revealed that almost one in two (45%) in Southeast Asia (SEA) lost money because of love scams online.

Most of the incidents here only cost less than 100 USD (22%). However, it is worth noting that the victim’s age and the possible cost of a romance scam seem to be overlapping.

With losses amounting to less than 100 USD, the two oldest generations (Baby Boomer and Silent Generation) logged the highest percentage, both at 33%.

The most senior age group, on the other hand, lost the most with nearly two in five of them admitting to losing 5,000-10,000 USD from love scams online.

“When we were younger, we tend to be more curious and a bit more reckless. When we become older, we have a lot of time in our hands and, usually, retirement funds in our bank accounts. Cybercriminals know these realities as well as our human tendencies to be lonely and crave for the company when forced to be alone inside our houses,” says Chris Connell, Managing Director for the Asia Pacific at Kaspersky.

“However, the cases we’ve seen lately should serve as a reminder for us to keep our minds “on” even as we listen to our hearts. Because nothing is more painful than having a fake lover and an empty wallet, we urge everyone from all ages to remain vigilant and be better in discerning the authenticity of the relationships we are building online and offline,” he adds. 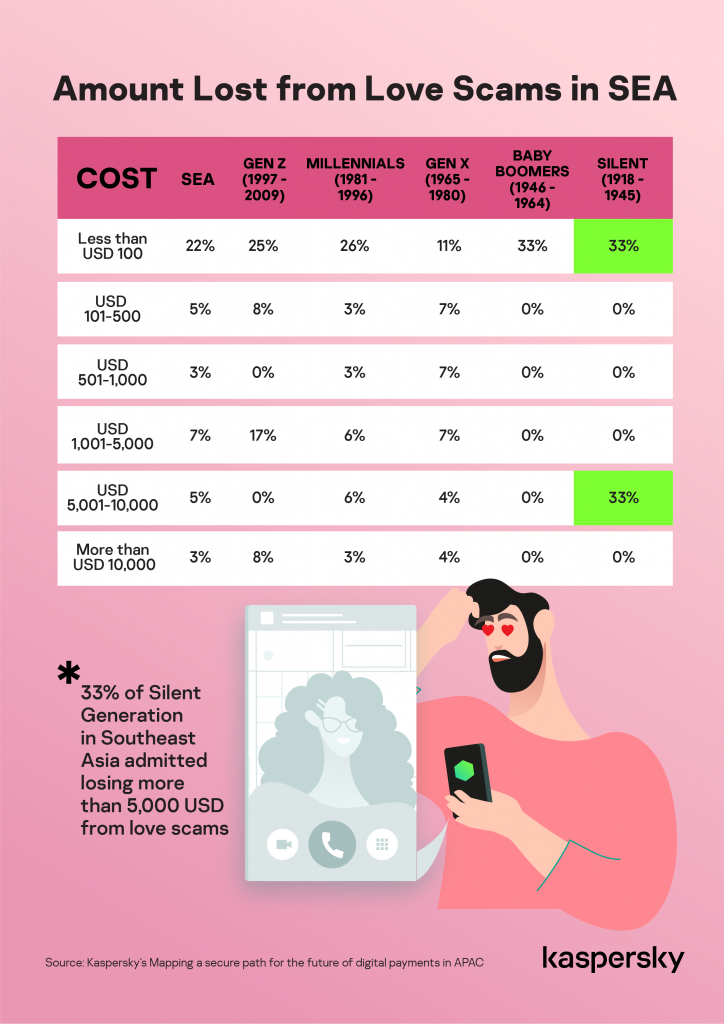 Regardless of platform or app, warning signs of online dating scams include:

How to avoid online dating scams

Avoiding romance scams means carefully scrutinizing any online relationship that develops too fast. Here are some more ways to keep your heart and wallet safe:

The Kaspersky “Mapping a digitally secure path for the future of payments in APAC” report studies our interactions with online payments. It also examines our attitudes towards them, which hold the key to understanding the factors that will further drive or stem the adoption of this technology. The study was conducted by research agency YouGov in key territories in APAC, including Australia, China, India, Indonesia, Malaysia, Philippines, Singapore, South Korea, Thailand and Vietnam (10 countries). Survey responses were gathered in July 2021 with a total of 1,618 respondents surveyed across the stated countries.

The respondents ranged from 18-65 years of age, all of which are working professionals who are digital payment users.

Through this study, when the behaviour of the population of a market is generalised, it is in reference to the group of respondents sampled above.