Often mistaken by recreational divers on their first trip to a seagrass meadow as nudibranchs, Thorny sea cucumbers are from the family Cucumariidae. These small, oblong-shaped creatures do not bury themselves as most other sea cucumbers do. They are easy to spot as they come in many shades of red, pink, orange and even purple, with sharp bumps (‘thorns’) on their ribbing. 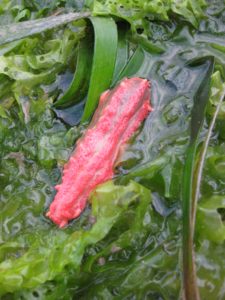 It is almost hypnotic to watch one feed, where it stretches out its (sometimes bright yellow and red) tentacles from its mouth opening, retracting them one at a time. If you look at these appendages in detail you see that they seem to have feathery flowers at the end of each extension as they feel around for their favourite prey of plankton and suspended organic matter in the shallows.

When it is sea cucumber breeding season, the seagrass meadow is full of tiny critters as small as half a pinkie-finger. They often cling to seagrass, bivalves or any other hard surface with their tubed feet and are able to hold on in strong waves if it chooses to.

Unfortunately this species is collected for the aquarium and medicinal trade. Those used as medicine are dried and sold at exorbitant prices; often too many are collected, threatening its survival in the wild. They are difficult to keep alive in an aquarium.

Kelab Alami conducts guided seagrass walks where many of these creatures can be found – log on to kelabalami.weebly.com for more information.