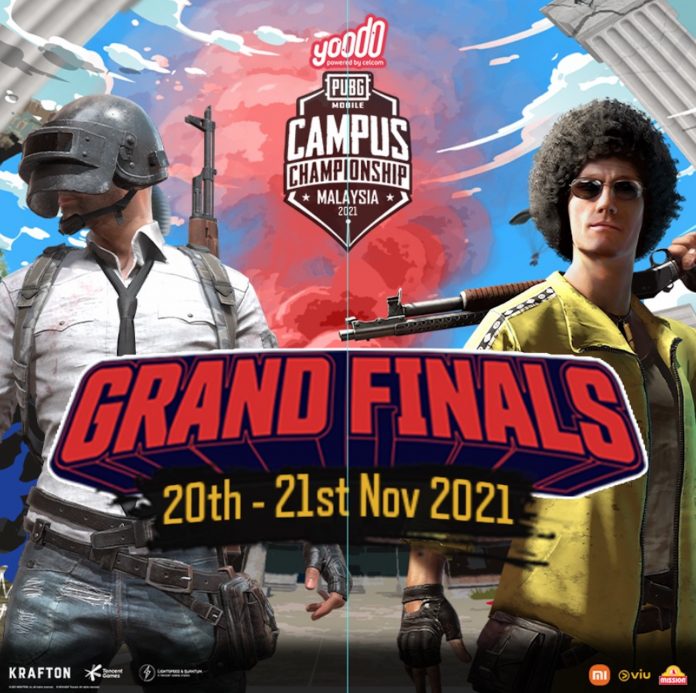 After weeks of spectacular battles, the top 16 teams of Yoodo PUBG Mobile Campus Championship (PMCC) 2021 are on the final path to clinch the title of PMCC 2021 champions. Get ready for the action this weekend on the 20th and 21st of November 2021!

A total prize pool of RM 60,000 is set to be taken home by the champions in this tournament brought to you by Yoodo, Malaysia’s first fully customisable and 100% digital telco.

Chow Tuck Mun, Head of Yoodo, added that this year’s PMCC presents higher stakes than ever. “On top of the prize money, the top 3 winning teams of the championship will also be representing Malaysia in the PUBG Mobile SEA Campus Championship (PMCC SEA) 2021, going up against winners from other countries in the region. It’s a true test of skill and Yoodo is proud to empower young gamers on their journey to achieving greatness,” he shared.

The top 16 teams heading to the PMCC 2021 Grand Finals weekend are:

“We’re fully impressed and entertained with the performance we’ve seen this far,” added Tuck Mun. “It’s a sure indicator that the top 16 teams are about to blow us all away in the Grand Finals. As a brand that strongly believes in unearthing young Malaysian talent, particularly in esports, it is incredibly satisfying to see our efforts with PMCC 2021 come to fruition. And we can’t wait to watch the action reach its pinnacle this weekend!”

The PUBG Mobile action is set to flow non-stop during the Grand Finals weekend with a special influencer show match, called Hide & Seek! Catch your favourite PUBG Mobile influencers such as Soloz, Daddyhood, Master Ramen, Pemburu and others in an epic battle on the 21st of November at 5.00 pm.

PMCC 2021 is supported by Official Smartphone Partner, Xiaomi – challenge your boundaries with RedMi Note4 10 Series, and Official Partner Viu. The championship is also supported by Official Corn Strips Partner, Mission Foods who will present a special reward to the top 3 winning teams with an entire year’s supply of Mission Corn Strips to fulfil their snacking while gaming needs!

Time to Bring Out Your Creativity