The meet-and-greet will be live streamed at 9.30pm on Thursday, 25 March and Tuesday, 30 March. Fans and viewers will have an opportunity to win prizes ranging from high tea buffets to aquarium tickets 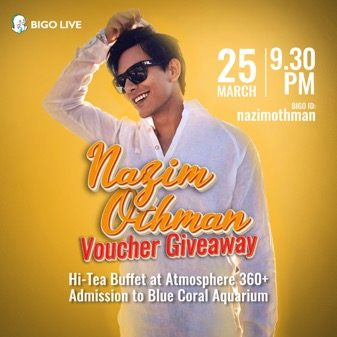 Fans and viewers will get an exclusive opportunity to interact with Nazim Othman, and stand a chance towin a weekday high tea buffet for two at Atmosphere 360 at KL Tower as well as a pair of admissiontickets to the Blue Coral Aquarium.

“COVID-19 and the ongoing MCO have changed the way we interact with another. As one of the mostpopular livestreaming apps available in Malaysia now, it is wonderful to see how Bigo Live is leveraging on its platform to connect and bring people closer together. It is certainly exciting to be able to explore analternative way for me to interact with my fans and I look forward to making the two nights a memorableone for all,” Nazim Othman said.

To participate in the livestream and the giveaway, viewers will need to  download the Bigo Live app andwatch out for a teaser post on  N az im Oth man ’s in st agram p age  . To stand a chance to win, viewerswill have to leave their BIGO ID in the comments section, and Nazim Othman will announce the top threewinners during his livestream session on 25th March.

Fans will also get an exclusive opportunity to interact with the popular actor-singer during a virtual Q&Asession on 30th March and three lucky fans will be chosen to participate in a live video call session with him.

Bigo Live strives to become the go-to source for interactive and engaging entertainment while empoweringusers with an exciting new social language. The live streaming platform continues to create exclusiveopportunities for the community to interact and engage with their favourite local celebrities from the comfortof their homes. This collaboration with Nazim Othman is part of Bigo Live’s ongoing efforts andcommitment to bringing positivity, hope, and joy to users in Malaysia and across the world, in the fightagainst COVID-19.

Sports Fans, the Moment You Have Been Waiting For is Coming!

Do You Think Going to the Cinemas and Dining Out is Safe?