Working parents – not just mothers are desperate for more support to better manage work and family responsibilities, as 69% plan to job hunt in the next 12 months

Madeleine M. Kunin says, Every time a woman leaves the workforce is because she can’t find or afford childcare, or she can’t work out a flexible arrangement with her boss, or she has no paid maternity leave, her family’s income falls down a notch. Simultaneously, national productivity numbers decline.

Over half of Malaysian mums admit they have missed out on career opportunities because of their decision to have a child, and continually face workplace challenges that make it harder for them to get ahead professionally.

Although 55% of Malaysian employees say they do have flexible working arrangements in some capacity, a whopping 82% of women and 75% of men still report the need for greater flexibility to effectively manage their home and work lives. This lack of balance is forcing 72% of women and 63% of men to search for a new job over the next 12 months.

This is according to new research by Monster.com, which surveyed over 2,000 professionals across Malaysia, the Philippines and Singapore to understand the unique challenges and barriers both men and women face at work, particularly with regards to parental leave and work-life balance. This survey was conducted for the third consecutive year as part of the #SheMakesItWork campaign in celebration and support of mothers in the workforce, or returning to work after having children.

When asked why mothers quit their jobs, 67% of Malaysian men said it’s because women desire to spend more time with their families, compared to 56% of women who said the same. In fact, most women said they believe mothers leave their jobs due to a lack of flexibility (66%), indicating that current policies around flexible working don’t provide the support needed.

Malaysian men are also quite concerned about the wellbeing of their families. 67% of men said they only return to work for financial reasons, with 49% worrying about who is looking after their children, and 51% are concerned with how they can better use flexible working options. 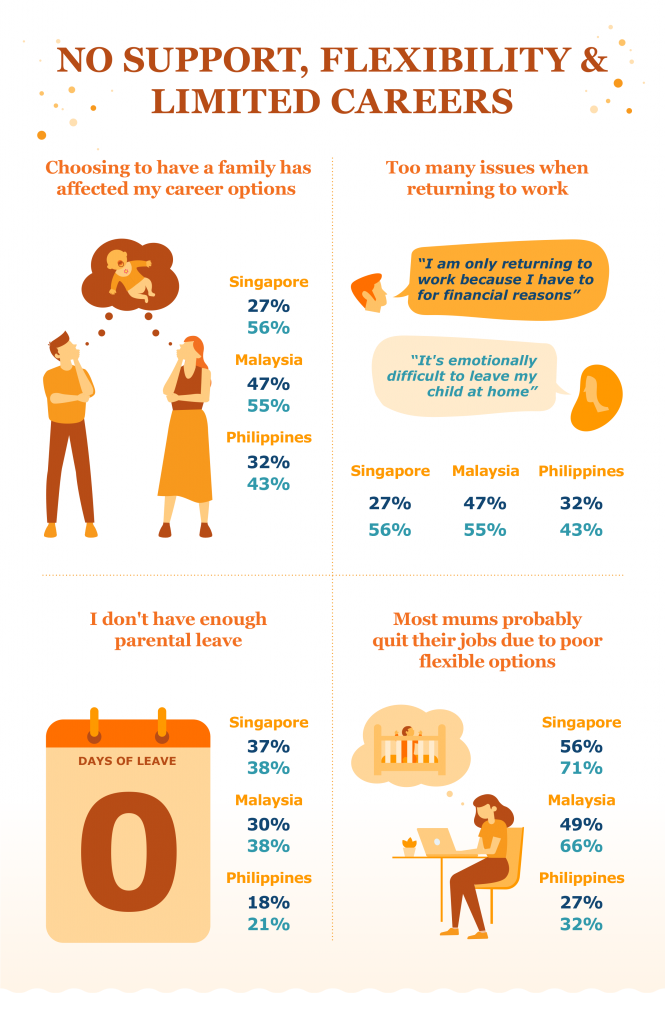 Interestingly, while 55% of women say they have missed out on career opportunities due to having a family, 46% of Malaysian men feel the same way.
Both Malaysian mums and dad worry (45%) about how they will make the most of their flexible working arrangements to effectively balance work and home, and 35% don’t believe current parental leave policies are sufficient for modern working parents.

“As both men and women take on responsibilities as breadwinners, they also share more parental obligations. Dads today are less likely to take their role for granted and tend to believe work priorities can interfere with their home lives. While 32% of parents enjoy formal flexible working arrangements, 21% of both men and women state they have no flexibility at all,” said Abhijeet Mukherjee, CEO of Monster.com – APAC & Gulf.

“Even though employers may state they offer arrangements to support working parents, this does not mean both mums and dads are free to utilise these policies how they see fit. Working parents are desperate for more choices and options, and Malaysian employers need to listen to their requests, or better communicate how they can take advantage of what is on offer to them,” added Mukherjee.

Nevertheless, Exco Liow Cai Tung of Tourism and Women, Family and Community Development at a recent Mother’s Day event in Johor Jaya and Taman Molek had voiced out the state government’s effort in aiding women by providing a nursing room for female civil servants at Kota Iskandar, Iskandar Puteri, Johor which was officiated by YM Che’ Puan Khaleeda Binti Bustamam mid last month and a nursery in order to encourage and help mothers manage families.

The effort is lauded for public servants and during the launch ceremony of the nursing room, 14 private companies, government agencies and NGOs had signed a MoU where their premises would set up nursing rooms within one year starting from May 2019 until May 2020.

It is hoped that more corporate organisations will follow suit for its employees, especially for new mothers and even fathers and this also encompass on leaves. Currently, the Malaysian Employment Act 1955 does not provide for mandatory paid paternity leave, although some employees in the public sector are given paid paternity leave ranging anywhere from 2 days to 2 weeks. But as for the private sector, paternity leave is not mandatory and may be given at the discretion of employers such in the case of AXA Malaysia and recently by foodpanda.com.

According to Sayantan Das, Managing Director, foodpanda Malaysia, “foodpanda acknowledges the importance of parents spending quality time to bond with their child. We believe that it is important for both parents to play an active role in the early stages of their child’s life.”

It is a good point by Das, but mandatory paid paternity leave has to come through legislation, and until and unless progressive employers look beyond short term commercial costs and focus on long term benefits, this still remains in a bubble.
I leave you with this thought by Quentin Bryce – Maternity leave and parental leave is absolutely vital for strengthening families. It’s an issue for men and women.