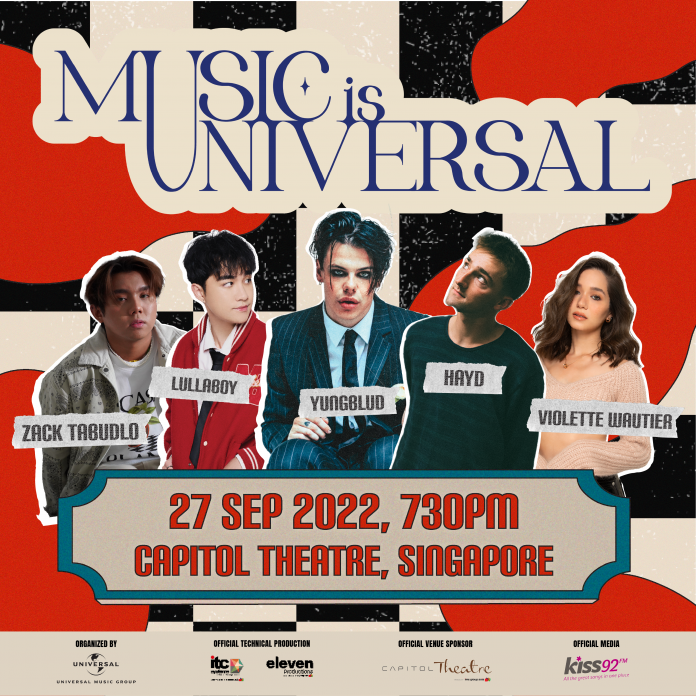 Off the back of the widely successful pre-pandemic inaugural edition in 2019, Universal Music Singapore is back with a bang this September with its second iteration of Music is Universal, featuring an equally galvanizing line-up. Taking centre stage at the historic Capitol Theatre, an iconic architectural gem in the heart of Singapore’s Civic District, this exclusive event will aptly go down in history too.

Paralleling the same spirit of universality as in 2019, the invite-only evening aims to spotlight the intricate tapestry of artists under the Universal Music roster, with a truly stellar representation from across the globe and Southeast Asia. A proclamation that music is indeed universal, transcending both boundaries and borders.

The eclectic lineup spans a compelling mix of genres from rock to dream pop. Headlined by Gen-Z’s rock n’roll poster child from Doncaster who has earned co-signs from rock legends such as Mick Jagger, Ozzy Osbourne, and Dave Grohl, YUNGBLUD will captivate any audience with his larger than life personality. His self-titled album, YUNGBLUD, is set to release on September 2 and fans in Singapore will get an energetic taster of his sold-out shows.

Said YUNGBLUD, “Singapore is an incredible city, and to share the stage with the biggest artists from Southeast Asia is so exciting to me. I love going to experience new places and cultures, especially in music, so to have this experience will be unforgettable.”

Joined by Michigan-born singer, songwriter and multi-instrumentalist – Hayd is known for his lush piano-based pop and signature mellow sound driven by brutally honest lyrics and raw vocals which has garnered him close to 770M career streams.

Said Hayd, “I’m forever thankful to fans in Southeast Asia for showing their massive support for Head in The Clouds and using the track to share their personal snippets of life on social media. It will be an overwhelming sight to behold when the crowd sings it live in Singapore.”

Featuring Violette Wautier, the Thai-Belgian multi-hyphenate whose dreamy alternative pop sound is a blend of ethereal vocals and atmospheric guitars topped the Apple Music charts at #1 in 7 countries with her single Smoke in 2020.

Said Violette Wautier, “I was in Singapore recently to watch a concert and it was unreal to see what live music meant to the fans. My friends in Singapore were sharing with me that they used to hear I’d Do It Again on the radio and I can’t wait to play it live for the first time at Music is Universal.”

Hailing from Southeast Asia as well, fast-rising Filipino alt-pop and R&B artist Zack Tabudlo will be gracing us with hits such as Binibini, Pano, Give Me Your Forever and more, following his sold-out US tour in May. Now the #1 Artist on Spotify in the Philippines with over 1.1B global streams, Zack is truly one to keep your eyes and ears out for.

Said Zack Tabudlo, “The diverse lineup at Music is Universal is a testament that music fans have embraced the many different languages our region speaks. I look forward to sharing the stage with the other regional and international powerhouses and it will be a monumental showcase to exhibit what our borders have to offer.”

Performing alongside these household names is American-born, Singaporean-raised, and of Indonesian origin, Bernard Dinata who goes by the moniker lullaboy. A truly global artist with his uniquely intimate lyricisms, heartfelt acoustic soundscapes, and Berklee-trained pop sensibilities, the 26-year old singer-songwriter is now the biggest independent artist in Singapore and poised to become Asia’s next breakout act.

Said lullaboy, “I can’t wait to perform on the same stage as these amazing acts. It’s a testament to the immense talent here at Universal Music. It will be a night to remember for everyone involved.”

Win tickets (for Singapore citizens only) exclusively at: https://UMGSEA.lnk.to/MIU2022SG

Follow the official event playlist on Spotify: Music is Universal