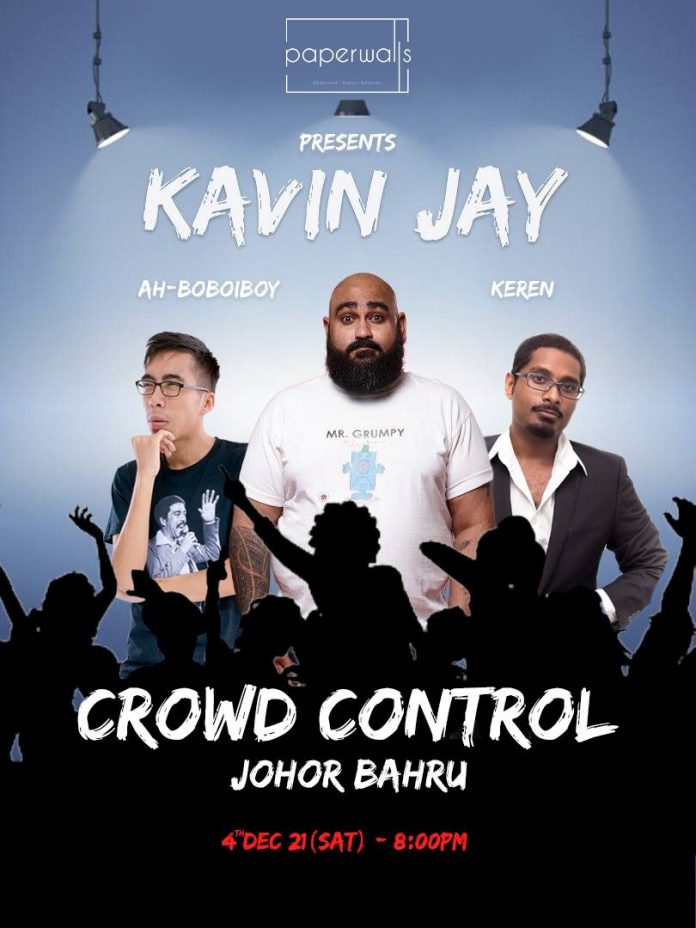 After a hiatus of not being able to host any events, Paperwalls – TheYard @Horizon Hills had to do some ‘crowd control’ when they hosted one of Southeast Asia’s most sought-after comedians, Kavin Jay, as he brought the house down with bags of laughter alongside funnyman Keren Bala Devan and Riezman Radzlan.

The host and owner of Paperwalls, Delaney Rodrigues said, “Paperwalls had to operate at half capacity and tickets evaporated as soon as sales were announced, hence the name crowd control!”

Riezman or also known as Ah-boboiboy was the opening act sharing punchlines and charming the audience with his witty jokes. Funnyman Keren Bala Devan was next, literally shouting his antics of real-life trials and tribulations which made the audience gag with hilarity.

The man of the hour, Kavin Jay charmed the audience with his politically incorrect and comical banter. Being voted as Malaysia’s grumpiest comedian, Kavin who also has a special on Netflix, has performed in numerous countries with Singapore, India, Hong Kong, Australia, and United Kingdom just to name a few.

A lucky draw was held at the end to further entertain the attendees, who did not expect it. The sponsors went a little crazy with the value of the items put up for the draw as well. Starbucks Malaysia (represented by their Hospitality Specialist, Azie and Store Managers Intan, Mujahid and Asraful) sponsored merchandises and vouchers worth over RM1500, LEGOLAND Malaysia Resort (represented by Thila Munusamy, Director Sales & Marketing) gave away four theme park tickets and four Sealife tickets, Dum Dum Authentic Milk Tea provided 100 vouchers worth RM10 each, Nyala Kraf Lilin sponsored three candle gift sets, Sedap Corner (represented by Alisa Lamlertkittikul, Executive Director) gave 4 sets of cookies worth RM89.90 each and Sunway Hotel BigBox (represented by Sumitha Sharlet, Brand Marketing Communications Manager) threw in a 2D1N stay in the deluxe room with breakfast for 2 adults and a Big BBQ Dinner for 2 pax.

The night not only ended in laughter but with goodies walkway for some.