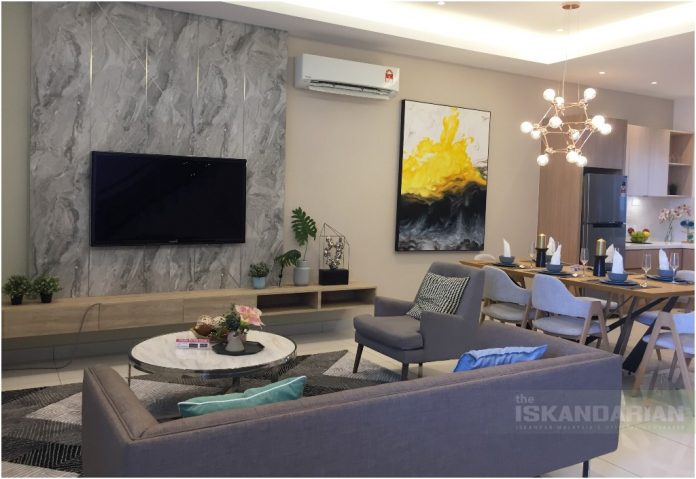 United Malayan Land Berhad (UMLand) had launched Topaz Residenz Section 2, their latest project at Seri Alam Township in a whole new experience – a virtual launching through Facebook live. The event was the first launch by the group for the year 2020.

This project is estimated to be completed in May 2022 with 150 units of double storey terrace houses to offer. With strategic location allowing easy accessibility via the Southern Link Highway and Eastern Dispersal Link, travelling is now made easy for future residents.

Topaz comes with two variants; Type A or Type B with a built-up area ranging from 2,152 sqft to 2,177 sft respectively.

“UMLand has track records of more than two decades. Bandar Seri Alam was launched in 1992 with 3762 acres, and now about 1000 acres are left. We are proud to say that UMLand’s development in Bandar Seri Alam and Bandar Seri Austin has won many recognitions and awards,” said KK Wong, Group Director of Townships UMLand in his opening speech.

“Now is the best time to buy because of the price, the best packages, and also the loan rate which is a very low rate,” he added.

“Future buyers can also benefit from the reintroduction of Home Ownership Campaign by the government due to the COVID-19 pandemic,” continued Wong also citing that the take up rate for Topaz Section 2 is currently at nearly 30%.

The price for Topaz Residenz Section 2 starts from RM744,800 for Type A and RM752,800 for Type B. UMLand also offers RM30,000 rebates for early birds besides the Free Legal fees and other special incentives.

Bandar Seri Alam has recently been awarded The Best Condo Apartment Development in the Southern Region through its Amber Heights Apartment. In addition to the award, UMLand has also won three Special Recognition Awards; Building Communities, Corporate Social Responsibility and Environment, Social and Governance by the PropertyGuru Asia Property Awards 2020.