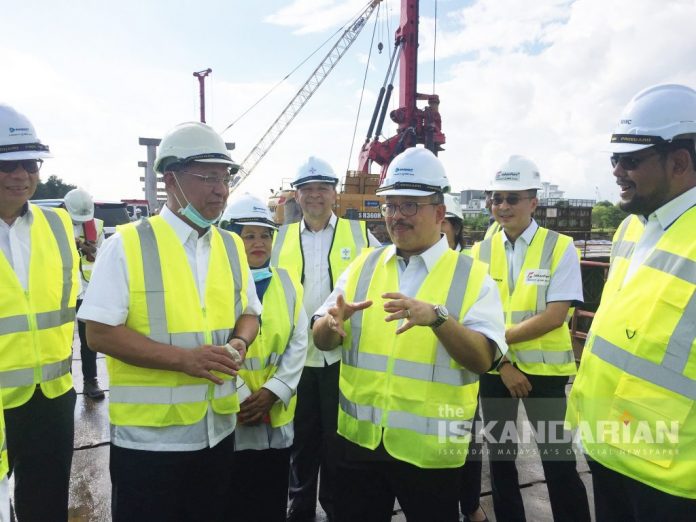 The public private project which costs approximately RM700 million will provide direct access from Pelabuhan Tanjung Pelepas, Gelang Patah to Tanjung Bin, Pontian, Johor. The 7.5 kilometres dual-lane, two-way bridge will reduce the travel time from an hour through the current land route to only 15 minutes.

“This project started since September 2017 by MMC Engineering Sdn Bhd as the main contractor, in partnership with CHEC Constructions (M) Sdn Bhd and it is hoped to contribute to the socio-economic of the people in the surrounding areas,” said Dato’ Sri Che Khalib Mohamad Noh, Chairman of Seaport Worldwide Sdn Bhd in his speech.

He also assured that the project will continue as per schedule by adhering to the Standard Operating Procedures, despite the COVID-19 that has affected the whole country followed by the Movement Control Order since March.

Meanwhile Hasni in his speech congratulated MMC Corporation Berhad for their continuous effort which can inspire other developers who are currently striving to finish their projects in Johor.

“Sungai Pulai Bridge is a project that gives inspiration to the public in Johor. The project itself is a game changer to the people living in the surrounding areas since the travelling time from Pontian to Johor Bahru and vice versa, will reduce significantly,” he added.

Among other features of the bridge includes a navigational clearance of 25 metres high and 100 metres width. The construction of the bridge will also ease the operation movement and logistics of the heavy industry and maritime industry.