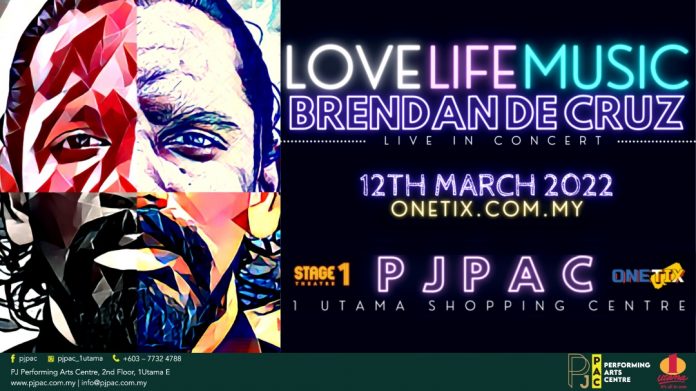 The LOVELIFEMUSIC concert will kick off with de Cruz in his element as a solo artist, performing his most emotional tunes for his audience in an intimate setting. De Cruz will then grow the show into a totally unique visual and musical experience complete with a 13-piece backline. The musical showcase aims to leave each spectator with a newfound appreciation for local music, brought to life entirely by homegrown talent.

“The amount of talent and devotion to the arts right here in Malaysia is beyond belief,” shares Brendan. “Local artists have been sustaining our music scene through sheer love and dedication to their craft. Over the years and despite the setbacks we have faced, I’ve seen artists put their music out with more passion than ever, determined to get their message out to the world”, he says, speaking from experience.

Since entering the local music scene, de Cruz has garnered recognition as a soulful singer with velvety smooth yet powerful vocals, known for deftly imbuing his music with sincerity and heart-tugging emotion. Despite being an independent artist with a purely organic following, de Cruz has made waves with his 4 independently produced albums and has supported other indie artists through his company,  Very Indie Events. With the online platform Nada Music, de Cruz has also mentored and showcased up-and-coming artists together with Nada Music co-founders, Az Samad and renowned Malaysian songbird,  Zee Avi.

“On top of featuring local artists, the entire LOVELIFEMUSIC production is being built from the ground up by members of the community, determined to make this dream a reality”, shares Brendan. “We have designed LOVELIFEMUSIC not just as my first concert, but as a stage to showcase the excellence and potential of Malaysian artists when given the support and space to shine.”

According to de Cruz, the journey will not end after the event. In fact, the concert aims to kick off a series of events showcasing the vast catalogue of independent talent from all segments in the local arts and entertainment industry. LOVELIFEMUSIC will be held in the PJPAC Stage 1 theatre in 1 Utama E at 50% capacity, with SOPs in place. Tickets are now on sale starting at RM78 each.

From now until the 9th of March, fans can stand to win TWO (2) VIP tickets worth RM150 each via the LOVELIFEMUSIC contest. Simply snap a fun selfie with any of the LOVELIFEMUSIC posters in and around 1 Utama Shopping Center, post and tag @brendandecruz and #LOVELIFEMUSIC on Instagram. Entries are unlimited and winners will be announced on 10th March.

For tickets, head on to onetix.com.my/event-detail/?id=32 or click here.

LOVELIFEMUSIC is currently open to sponsors who wish to support the production through monetary or in-kind sponsorship. For more information on the event or sponsorship enquiries, contact: